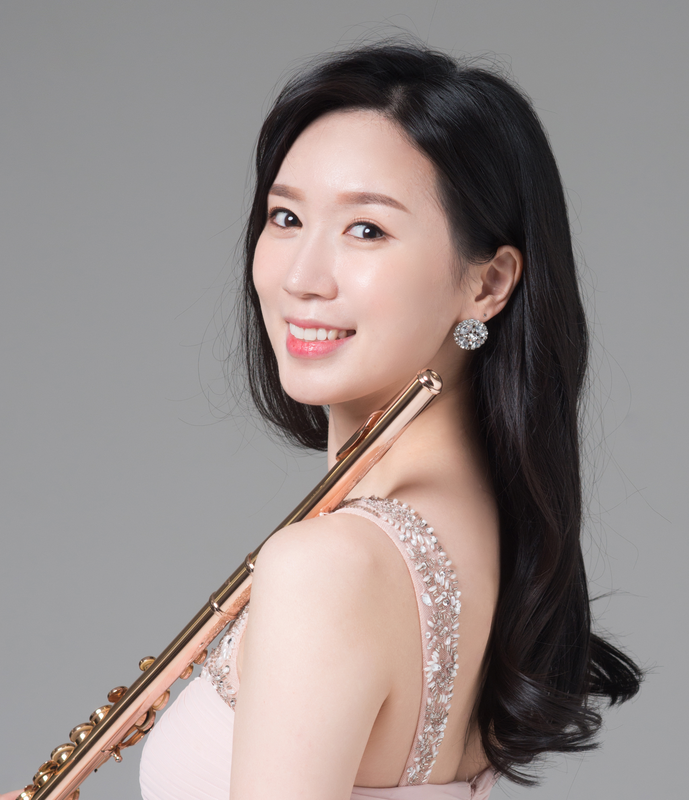 플루티스트 정윤희 Yoon-Hee Jung, a native of Seoul, South Korea, began her flute studies at the age of seven and made her debut with the New Seoul Philharmonic Orchestra four years later. She attended the Yewon School and the Seoul Arts High School in Korea and while studying with Ui-Kyung Park at the Seoul Arts High School, she gave a solo recital as the winner of the Kumho Arts Center's Young Artist Audition. She also was the first prize winner of the Music Journal Competition, the Korean Philharmonic Orchestra Competition, and the TBC Broadcasting Competition in Korea.
Yoon-Hee then moved to Southern California to study with world-renowned flutist and educator, James Walker, and that same year, she won second prize at the Pasadena Showcase Instrumental Competition at the age of seventeen. She served as principal flute of Pacific Youth Symphony under the baton of Michael Hall. Yoon-Hee was also a top prize winner at the Yokohama International Competition in Japan and the recipient of the Gluck Fellowship, the USC Thornton Merit Scholarship, the USC Thornton Scholarship Quintet, and the Merit Scholarship from the New England Conservatory. She has participated in numerous summer festivals including the National Repertory Orchestra in the summer of 2010.
Yoon-Hee received her Bachelor’s and Master’s Degrees with Academic Honors from the New England Conservatory of Music in Boston, MA, where she studied with Paula Robison and Jeanne Baxtresser. She completed a Doctor of Musical Arts degree in Flute Performance at The University of Southern California under the tutelage of James Walker in May 2015. The minor fields for her doctoral degree included Arts Leadership, Early Music Performance (Baroque Flute) and Sacred Music. She studied traverso with Dr. Rotem Gilbert and joined the USC Thornton Baroque Sinfonia led by Dr. Adam Gilbert, in addition to performing on traverso in LA Opera's production of Dido and Aeneas.
Yoon-Hee is a founding member of Ensemble Christo-Los Angeles, the ensemble-in-residence at Biola University. She is also the flutist of the 2015 Beverly Hills National Audition winner, duoKYaria, flute and harp duo. duoKYaria has performed over ten recitals in 2015-2016 season and released their first album, le petite cadeau de duoKYaria, which includes their passionate and intense transcriptions of Carmen Fantasie for flute and harp.
As well as sharing the beauty of music through performances, Yoon-Hee is equally passionate about mentoring young musicians of all cultures and backgrounds. Yoon-Hee believes that the power of music education is capable of helping to brighten students lives in many ways. In hopes that many children can experience a performing arts education, she has worked with students at Yeonpyeong Island and has participated in numerous outreach programs internationally. She also went on music mission trips to Japan, China and Paraguay.
She held teaching positions in the Colburn School's Jumpstart Young Musician's Program and Gum Nanse Youth Orchestra (GYO) of Seongnam Foundation as a mentor flute teaching artist, Diamond Bar High School of Walnut Valley Unified School District, Kaywon Middle School of Arts  as a flute teacher and Junior Chamber Music, Inland Empire as a flute chamber coach. She was also on the juries of Diamond Bar Performing Arts Contest, Diamond Bar, CA and JAYMF Competition, Torrance, CA in 2016
Currently, Yoon-Hee is back in Seoul, South Korea teaches in Seoul Christian University, Yewon school, Seoul Arts High school, Seoul Foreign School, The Institute for Gifted Young Musicians at Seoul National University of Education, and Seoul Theological University-Conservatory. She has performed as guest principal flute with Daejeon Philharmonic Orchestra, Seongnam Philharmonic Orchestra, Symphony S.O.N.G. and TIMF Ensemble.